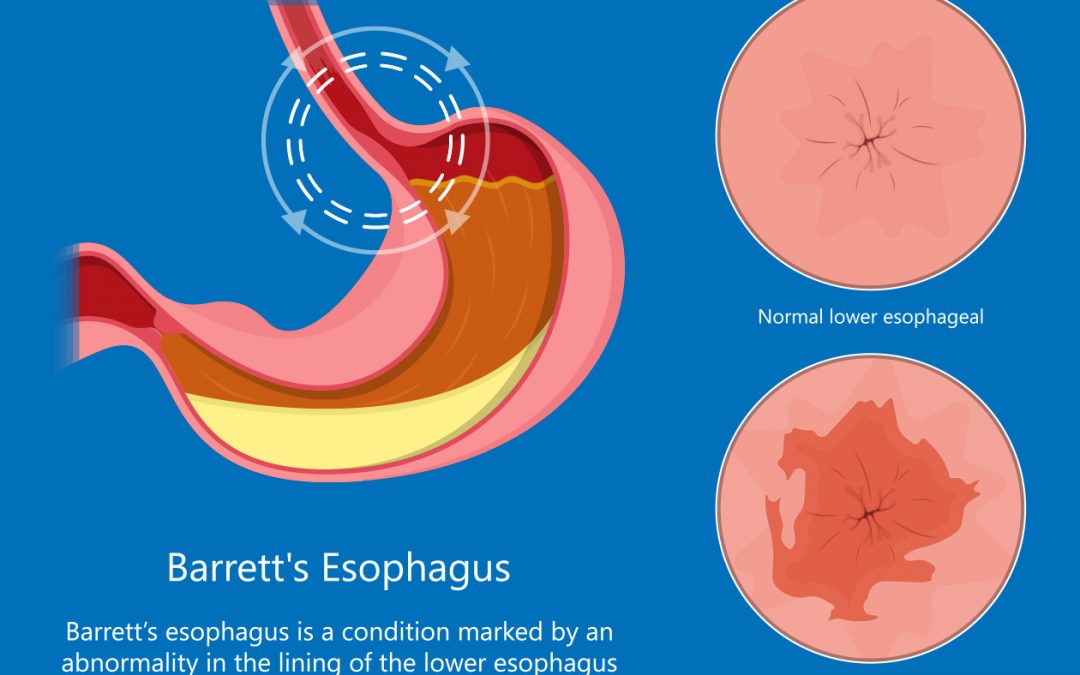 information provided by the American Society of Gastrointestinal Endoscopy

What is Barrett’s Esophagus?

It is believed that the main reason that Barrett’s esophagus develops is because of chronic inflammation resulting from Gastroesophageal Reflux Disease (GERD). Barrett’s esophagus is more common in people who have had GERD for a long period of time or who developed it at a young age. It is interesting that the frequency or the intensity of GERD symptoms, such as heartburn, does not affect the likelihood that someone will develop Barrett’s esophagus.

Am I at risk for esophageal cancer?

The most common symptom of GERD is heartburn, a condition that 20 percent of American adults experience at least twice a week. Although these individuals are at increased risk of developing esophageal cancer, the vast majority of them will never develop it. In a few patients with GERD (about 10 to 15 percent of patients), a change in the lining of the esophagus develops near the area where the esophagus and stomach join. When this happens, the condition is called Barrett’s esophagus. Doctors believe that most cases of adenocarcinoma of the esophagus begin in Barrett’s esophagus.

How does my doctor test for Barrett’s Esophagus?

Your doctor will first perform an imaging procedure of the esophagus using endoscopy to see if there are sufficient changes for Barrett’s esophagus. In an upper endoscopy, the physician passes a thin, flexible tube called an endoscope through your mouth and into the esophagus, stomach and duodenum. The endoscope has a camera lens and a light source and projects images onto a video monitor. This allows the physician to see if there is a change in the lining of the esophagus. If your doctor suspects Barrett’s esophagus, a sample of tissue (a biopsy) will be taken to make a definitive diagnosis.

Capsule Endoscopy is another test that has been used to examine the esophagus. In capsule endoscopy, the patient swallows a pill-sized video capsule that passes naturally through your digestive tract while transmitting video images to a data recorder worn on your belt. With capsule endoscopy, the physician is not able to take a sample of the tissue (a biopsy).

Both of these techniques allow the physician to view the end of the esophagus and determine whether or not the normal lining has changed. Only an upper endoscopy procedure can allow the doctor to take a sample of the tissue from the esophagus to confirm this diagnosis, as well as to look for changes of potential dysplasia that cannot be determined on endoscopic appearance alone. Barrett’s tissue has a different appearance than the normal lining of the esophagus and is visible during endoscopy.

Taking a sample of the tissue from the esophagus through an endoscope only slightly lengthens the procedure time, causes no discomfort and rarely causes complications. Your doctor can usually tell you the results of your endoscopy after the procedure, but you will have to wait a few days for the biopsy results.

Who should be screened for Barrett’s Esophagus?

Barrett’s esophagus is twice as common in men as women. It tends to occur in middleaged Caucasian men who have had heartburn for many years. There is no agreement among experts on who should be screened. Even in patients with heartburn, Barrett’s esophagus is uncommon and esophageal cancer is rare. One recommendation is to screen patients older than 50 years of age who have had significant heartburn or who have required regular use of medications to control heartburn for several years. If that first screening is negative for Barrett’s tissue, there is no need to repeat it. There is a great deal of ongoing research in this area and so recommendations may change. You should check with your doctor on the latest recommendations.

How is Barrett’s Esophagus treated?

Medicines and/or surgery can effectively control the symptoms of GERD. However, neither medications nor surgery for GERD can reverse the presence of Barrett’s esophagus or eliminate the risk of cancer. There are some treatments available that can destroy the Barrett’s tissue. These treatments may decrease the development of cancer in some patients and include heat (radiofrequency ablation, thermal ablation with argon plasma coagulation and multipolar coagulation), cold energy (cryotherapy) or the use of light and special chemicals (photodynamic therapy).

It is necessary to discuss the availability and the effectiveness of these treatments with your gastroenterologist to be certain that you are a candidate. There are potential risks from these treatments and they may not benefit the majority of patients with Barrett’s esophagus. There is much research being conducted in this area; you should talk with your doctor about recommendations and guidelines.

Dysplasia is a precancerous condition that doctors can only diagnose by examining tissue samples under a microscope. When dysplasia is seen in the tissue sample, it is usually described as being “high-grade,” “low-grade” or “indefinite for dysplasia.”

In high-grade dysplasia, abnormal changes are seen in many of the cells and there is an abnormal growth pattern of the cells. Low-grade dysplasia means that there are some abnormal changes seen in the tissue sample but the changes do not involve most of the cells, and the growth pattern of the cells is still normal. “Indefinite for dysplasia” simply means that the pathologist is not certain whether changes seen in the tissue are caused by dysplasia. Other conditions, such as inflammation or swelling of the esophageal lining, can make cells appear dysplastic when they may not be.

It is advisable to have any diagnosis of dysplasia confirmed by two different pathologists to ensure that this condition is present in the biopsy. If dysplasia is confirmed, your doctor might recommend more frequent endoscopies, or a procedure that attempts to destroy the Barrett’s tissue or esophageal surgery. Your doctor will recommend an option based on how advanced the dysplasia is and your overall medical condition.

If I have Barrett’s Esophagus, how often should I have an endoscopy to check for dysplasia??

The risk of esophageal cancer developing in patients with Barrett’s esophagus is quite low, approximately 0.5 percent per year (or 1 out of 200 per year). Therefore, the diagnosis of Barrett’s esophagus should not be a reason for alarm. It is, however, a reason to have periodic upper endoscopy examinations with biopsy of the Barrett’s tissue. If your initial biopsies don’t show dysplasia, endoscopy with biopsy should be repeated about every three years. If your biopsy shows dysplasia, your doctor will make further recommendations regarding the next steps.

IMPORTANT REMINDER:
This information is intended only to provide general guidance. It does not provide definitive medical advice. It is very important that you consult your doctor about your specific condition.